You are here: Home / News / FAQ / What are the Regular Frequency Bands of Wireless Modules in Major Countries?

What are the Regular Frequency Bands of Wireless Modules in Major Countries?

With the continuous progress of the Internet of Things (IoT)industry, wireless communication technology is also booming. As the most important part of the IoT, wireless module is an important part of all IoT equipment, and has broad market potential. 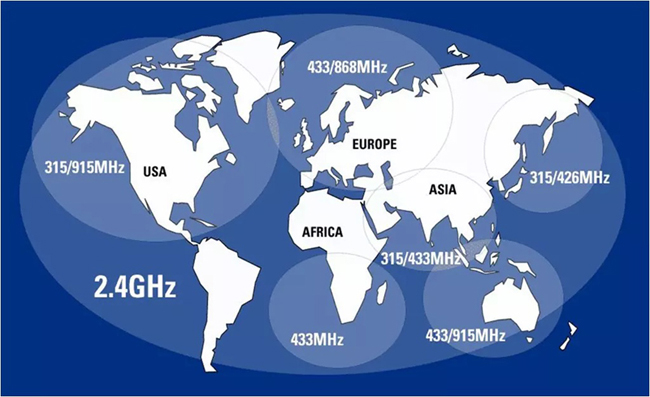 2.4G is a special frequency band, its frequency band range is 2.4 ~ 2.5GHz, which is widely used in the world. It is a networking protocol developed based on high-speed transmission rate. It has weak diffraction ability, low receiving sensitivity, short transmission distance, strong penetration, easy networking and development. Therefore, 2.4GHz wireless module is generally used in indoor occasions, such as wireless mouse, wireless router and so on.

India's conventional is 433MHz and 868mhz. While 868mhz is relatively popular in India.

The frequency bands commonly used in most countries of Southeast Asia are 433MHz and 470MHz. For example, in China, the conventional frequency band ranges from 433.05 to 434.7 HMZ, belonging to the 433 MHz frequency band, and 470MHz is used in the interphone field.

Most countries in the Middle East are the same as those in Southeast Asia. The frequency band commonly used is 433MHz.