You are here: Home / News / FAQ / How Does the LLCC68 LoRa Module Help the Sub-1Ghz Wireless Connection Market?

How Does the LLCC68 LoRa Module Help the Sub-1Ghz Wireless Connection Market?

In the past few years, with the rapid development of the IoT application, various IoT technologies have also emerged and accelerated development. The demand for low-cost and high-performance IoT link technology has been increasing, while the traditional Sub-1Ghz wireless technology has stagnated a little bit and gradually cannot meet the needs of the market.

In response to this demand, Semtech developed a LoRa Core™ LLCC68 chip with high performance and reasonable cost to help the development of traditional Sub-1Ghz wireless link market. As a professional RF module supplier, DreamLNK developed a cost-effective LoRa module DL-LLCC68-S based on this RF chip. The product picture is as follows (shield can be added on request):

As we all know, as a popular physical layer wireless modulation technology for long-distance communication connection, LoRa mainly operates in the global license-free (ISM) frequency band, including 433MHz, 470MHz, 868MHz, 915MHz, etc. LoRa technology does not need to build base stations. One gateway can control many equipment, and the network layout method is more flexible, which can greatly reduce the construction cost. Therefore, LoRa is widely deployed in many vertical industries such as Smart Community, Smart Home, Smart Building, Smart Meter, Smart Agriculture and Smart Logistics. So, LoRa Core ™ LLCC68 (DL-LLCC68-S LoRa module) can meet a variety of application in the markets.

2. Stronger anti-interference capability: LoRa uses spread spectrum technology to receive up to 20dB under noise (LLCC68 supports 17.5dB), while FSK theoretically requires 8dB above noise to guarantee the required PER;

3. Full low power consumption: the sleep current of LLCC68 is less than 2uA, and the transmitting current when working is 45mA@17dBm; while the receiving current is only 5mA. Due to Semtech innovation ® CAD technology, the entire wake-up process only requires about 2 symbols, of which about one symbol to receive, and one symbol time to calculate. However, at the same rate, FSK generally needs a leading of 3 bytes or more for receiving synchronization, and the receiving window needs to be opened for more than 5ms. At the same rate, LoRa's battery life is three to four times longer than FSK's when performing periodic listening (WOR).

4. Larger network capacity: with the help of LoRa's overall innovation and optimization on network capacity (such as node outgoing frequency, packet length, signal quality and node rate, number of available channels, density of base station/gateway, signaling overhead and number of retransmissions), LoRa's communication in the same band is similar to code division multiplexing, and different spread spectrum factors in the same band do not interfere with each other. So, it can be deployed on demand. According to the feedback of worldwide market, this LoRa module (DL-LLCC68-S) is really the best choice for LoRa applications. It has below advantages:

2.   It supports both LoRa and FSK modes (-125dBm@FSK, -129dBm@LoRa); compared with traditional Sub-1Ghz wireless module, the FSK mode of LLCC68 is more sensitive 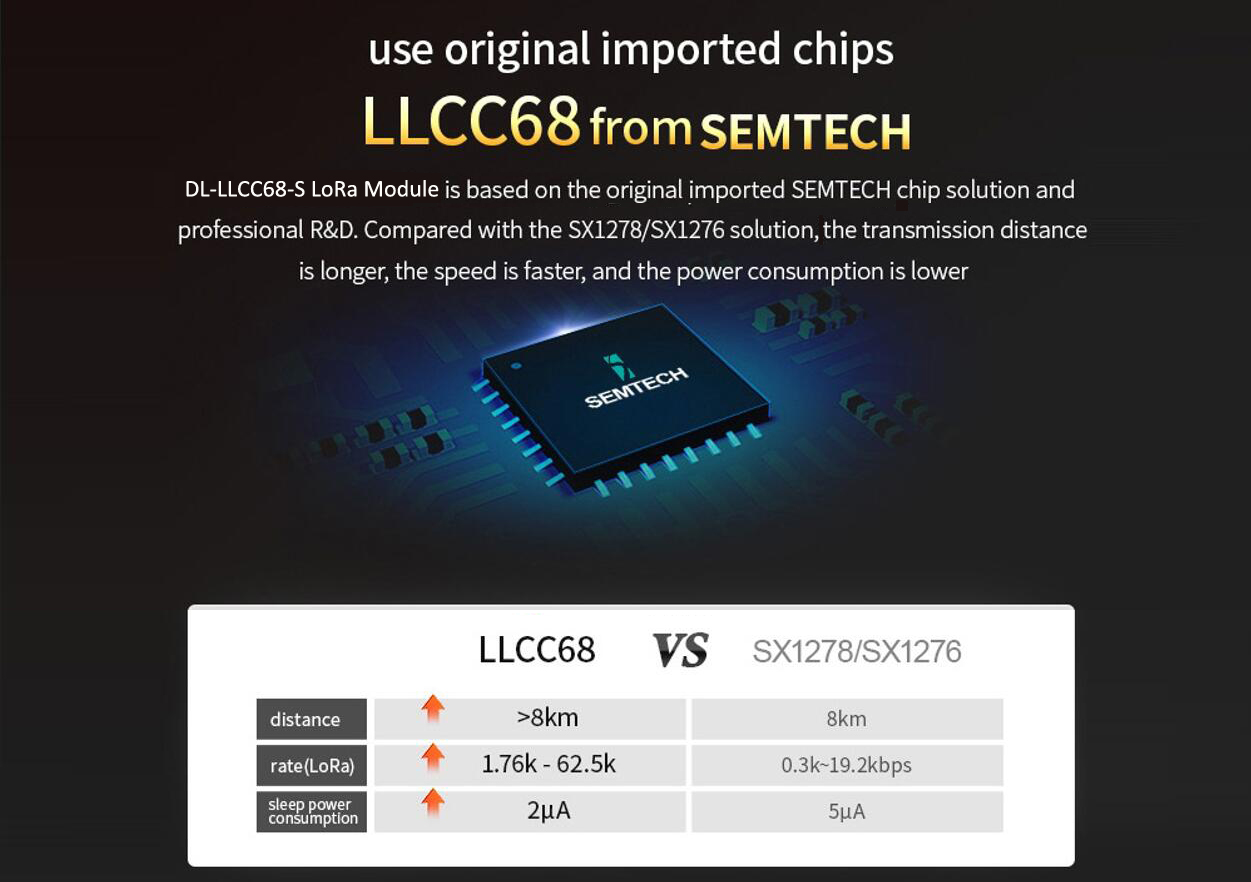 Welcome to contact us (james@dreamlnk.com) to get more informations (Software demo, Package drawings, PCBA layout instruction, Data sheet of this Semtech's LLCC68). If you need any sample, please feel free to let us know!